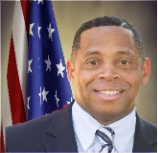 Councilman George L. Cook III has lived in Hillside for over 40 years. He is a 1986 graduate of Hillside High School and has always maintained a connection to his community as a public servant, most recently as Councilman-At-Large.

Councilman Cook started his public service in 2010 after being elected to the Hillside Board of Education. He served two terms on the Board and during his tenure served four years as Board President and two years as Board Vice President. He was also appointed to the New Jersey School Board of Directors in 2015.

Following his service as a School Board member, Cook ran for local office and was elected to the Hillside Township Council in 2017. During his tenure on the Council, he has served as Chairman of the Personnel Committee, liaison to the Zoning Board of Adjustment and Council Vice President in 2018, 2019, and 2020.

Councilman Cook's public advocacy is only matched by his volunteer work, specifically, his efforts to serve the youth of Hillside. He has been a volunteer basketball and football coach for the Recreation Center and has sponsored State legislators visiting with residents. He led the Juneteenth Ceremony and African American flag raising during Black History Month in 2020.

Councilman Cook has been a member of the Hillside Scholarship Fund since 1986, the Lions Club since 2017, and the Union County College Foundation. He also served in the United State Army New Jersey National Guard from 1991-1994.

Councilman Cook is married to his wife, Quanda, and has one daughter, Brittany, who is a Class of 2017 graduate of Hillside High School.

© The Township of Hillside 2021 - powered by EggZack